by Sumitrain Mains, Other, Snacks

Sometime in 2004 I was in Garhwal (North-India) for a week, visiting organic Dehraduni Basmati farmers and herb farms. Long enough to pick up recipes from families of farmers like a magpie! Soon I will be featuring some of them here. This is their version of fries which were sold at a street-side eatery as a snack. Aloo Churchurri- the word “churchurri’ is intended to convey the sizzling sound of the herbs being thrown in at the end, just before the fries were scooped out! Garhwal has some special herbs that rest of India does not grow or use. Jhamboo/ Pharan is one of those. A flat leaved chive Allium stracheyii, more garlicky in flavour than our chives. A close relative of the Chinese chive Allium tuberosa in taste.

The process of starting the frying in cold oil (something I came across in Spain later), gives a very distinct taste and texture to the potatoes. The next batch is started in fresh oil again, which I found very healthy as an option unlike other eateries that keep using it for 2-3 days. Since the oil does not smoke or discolour, you can use the oil as a shortening in Paratha dough, store it in a bottle for stir-frying vegetables, it is infused with flavours. At the eatery the hot oil was used to make batches of chicken stir-fries at the next cooking counter. A delectable mix of herbs and masala topping makes these fries exceptional and to die for.

Use waxy large potatoes/ I do not peel them if they are organic. 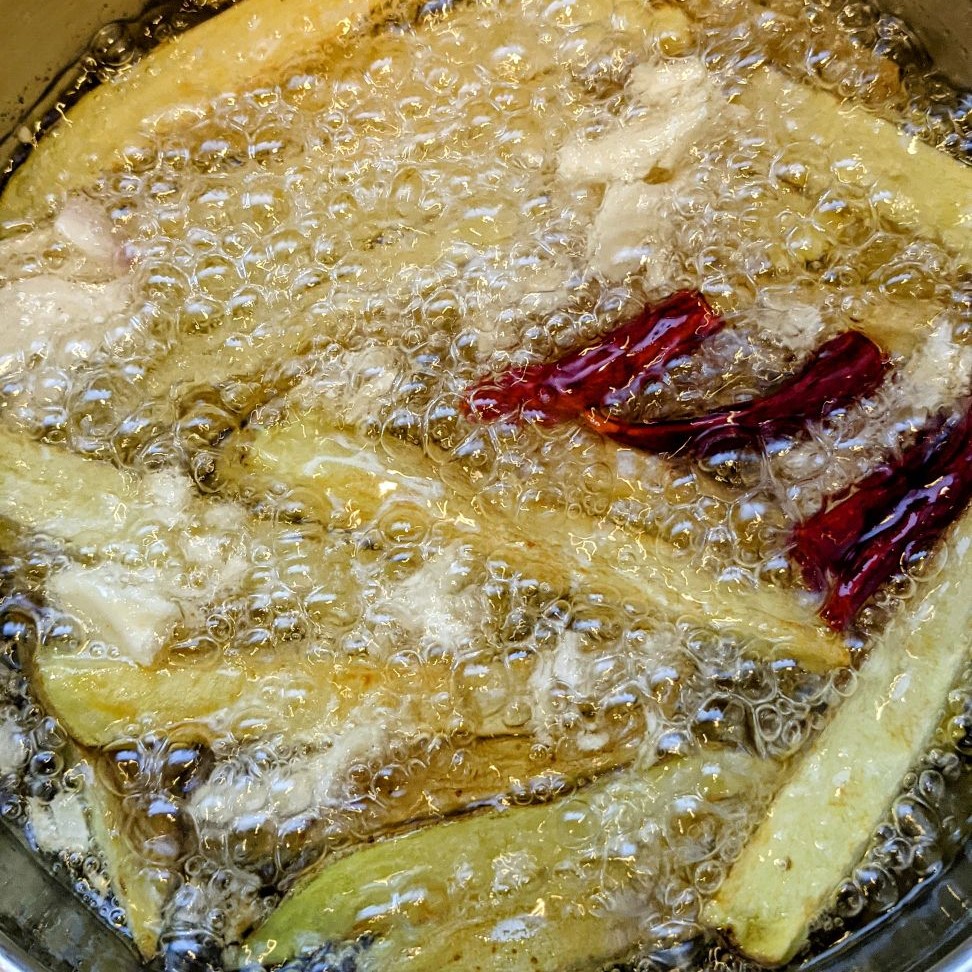 Achieve this colour, and see it sizzle. When chilies are fried time to throw in the herbs all in one go.

https://www.indiansupperclub.com
We use cookies on our website to give you the most relevant experience by remembering your preferences and repeat visits. By clicking “Accept”, you consent to the use of ALL the cookies.
Cookie settingsACCEPT
Manage consent

This website uses cookies to improve your experience while you navigate through the website. Out of these, the cookies that are categorized as necessary are stored on your browser as they are essential for the working of basic functionalities of the website. We also use third-party cookies that help us analyze and understand how you use this website. These cookies will be stored in your browser only with your consent. You also have the option to opt-out of these cookies. But opting out of some of these cookies may affect your browsing experience.
Necessary Always Enabled

Any cookies that may not be particularly necessary for the website to function and is used specifically to collect user personal data via analytics, ads, other embedded contents are termed as non-necessary cookies. It is mandatory to procure user consent prior to running these cookies on your website.